Bangkok is one of the world's top tourist destinations. Of 162 cities worldwide, MasterCard ranked Bangkok as the top destination city by international visitor arrivals in its Global Destination Cities Index 2018, ahead of London, with just over 20 million overnight visitors in 2017. This was a repeat of its 2017 ranking (for 2016). Euromonitor International ranked Bangkok fourth in its Top City Destinations Ranking for 2016. Bangkok was also named "World's Best City" by Travel and Leisure magazine's survey of its readers for four consecutive years, from 2010 to 2013. 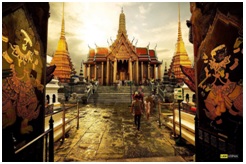 As the main gateway through which visitors arrive in Thailand, Bangkok is visited by the majority of international tourists to the country. Domestic tourism is also prominent. The Department of Tourism recorded 26,861,095 Thai and 11,361,808 foreign visitors to Bangkok in 2010. Lodgings were made by 15,031,244 guests, who occupied 49.9 percent of the city's 86,687 hotel rooms. Bangkok also topped the list as the world's most popular tourist destinations in 2017 rankings. 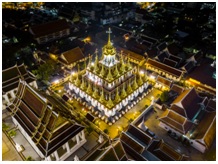 Bangkok's multi-faceted sights, attractions and city life appeal to diverse groups of tourists. Royal palaces and temples as well as several museums constitute its major historical and cultural tourist attractions. Shopping and dining experiences offer a wide range of choices and prices. Among Bangkok's well-known sights are the Grand Palace and major Buddhist temples, including Wat Phra Kaew, Wat Pho, and Wat Arun. The Giant Swing and Erawan Shrine demonstrate Hinduism's deep-rooted influence in Thai culture. Vimanmek Mansion in Dusit Palace is famous as the world's largest teak building, while the Jim Thompson House provides an example of traditional Thai architecture. Other major museums include the Bangkok National Museum and the Royal Barge National Museum. Cruises and boat trips on the Chao Phraya and Thonburi's canals offer views of some of the city's traditional architecture and ways of life on the waterfront. 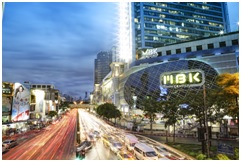 Shopping venues, many of which are popular with both tourists and locals, range from the shopping centres and department stores concentrated in Siam and Ratchaprasong to the sprawling Chatuchak Weekend Market. Taling Chan Floating Market is among the few such markets in Bangkok. Yaowarat is known for its shops as well as street-side food stalls and restaurants, which are also found throughout the city. Khao San Road has long been famous as a destination for backpacker tourism, with its budget accommodation, shops and bars attracting visitors from all over the world

Getting Around in Bangkok

Bangkok is surprisingly easy to navigate your way around. The Skytrain (BTS) and underground (MRT) rail systems connect the main shopping, entertainment and business areas of the city, while river taxis and express boats can be used to explore many historic sites and attractions at the riverside. 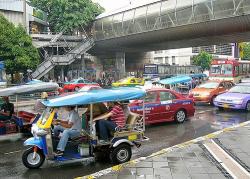 Taxis are cheap and appear on virtually every corner at almost any time. Tuk-tuks, once a big Bangkok attraction, are slowly disappearing in favour of more comfortable transport, but are still worth a ride at least once. Most buses might be slow and old, but a great way to travel with locals and get a real feel of the city. Another option is motorbike taxis. They're fast and efficient, but not for everyone. There is, of course, always the humble bicycle too - perhaps not the safest option, and strictly for the adventurous.

Bangkok is a tropical city that sits just north of the equator, and so it's pretty warm throughout the year. At times the heat can be oppressive. 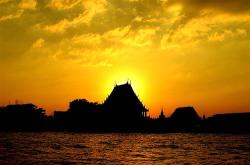 If your especially adverse to extreme temperatues, avoid between April and May when the weather is especially hot and sticky (temperatures around 34C). However, don't fret if you do choose to come then: one of Thailand's most celebrated festivals, Songkran, takes place in April and involves lots of refreshing water throwing to help cool everyone down. Perhaps the best time to visit is from October until February, when temperatures hover between 25 and 28C and there are light breezes and only occasional showers. From June through to September there's still plenty of sunshine and it's much cooler (around 24-28 C). Remember though, this is the season for rain and there can lots of it. However, this is actually quite refreshing! Others advantages are less visitors and better hotel rates. 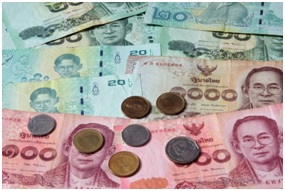 Payment in dollars or euros is not possible, with the exception that payment for excursions and other services of tourist guides personally. Changing money in Bangkok is a fairly easy process. Choosing where to change your money can have a noticeable impact on how much baht you'll have in your wallet. Those on a budget should try to avoid big banks in shopping malls and popular tourist spots as the higher rents are passed onto the customer in the form of commission rates. And don't forget, you must have your passport with you to exchange currency in Bangkok. Superrich is one of the most famous money exchange companies in Bangkok. They have several branches across the city, ranging from kiosks in selected BTS Skytrain stations to small shops along Pratunam and Chitlom.

About Sim Card, the first thing you'll want to do is get connected. When you switch on your phone you'll either be given the option to connect to one of 3 main networks in Thailand: AIS, DTAC or True.

In Suvarnabhumi Airport (BKK), there are several places to buy a Thai SIM card. The main spot are the Network's kiosks after you exit customs, right outside of the International gates where people hold up signs. There are kiosks for Thailand's main mobile operators - DTAC (blue), AIS (Green ) and True Move (Red). 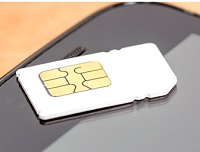 All three networks sell Tourist or Traveler SIM cards. The base model is a is unlimited internet for 7 Days and 100 Baht of calling and SMS credit. There are also other flavors like 15 and 30 day packages.